One of the UK’s most famous prisons, Dartmoor Prison and Museum, near Princetown, is a great day out for anyone interested in recent history. Still run as a category C men’s prison today, the museum is separate to the working jail.

For more than 200 years, Dartmoor prison has been home to some of the UK’s most dangerous criminals. Most notable, Frank Mitchell ‘The Mad Axeman’. He escaped and caused one of the biggest manhunts the UK has seen! Unfortunately, recapture was never his fate. He eventually met his demise at the hands of the Kray Gang.

Construction of the granite complex began in 1806 and lasted three years. The high stone walls have seen the likes of Napoleonic War prisoners, American POWs from the war of 1812, WW1 conscientious objectors, and even political prisoner, Eamon de Valera, the Republic of Ireland’s first Prime Minister.

Today, Dartmoor Prison is a jail for non-violent offenders, sex offenders, and white-collar criminals. Their rehabilitation programmes are some of the world’s most respected and successful systems. 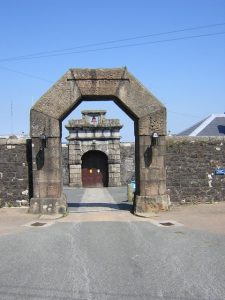 Housed in a separate unit to the working prison, yet in the same grounds as it, Dartmoor Prison Museum was once the prison’s dairy. Here, you will find historic relics of a violent past. Displays at the museum include flogging equipment, straight jackets and manacles once used to control and confine prisoners before the 19th century. You’ll also find Napoleonic soldiers uniforms, models, and paintings created by the incarcerated in their displays.  Some of the items made by the prisoners are for sale in the museum’s gift shop.

In 2013, the coalition of the Conservative Party and Liberal Democrats placed a ten-year closure notice on Dartmoor Prison. The UK has scheduled the closure of many other Victorian prisons too. The Conservative Party confirmed this news in the Autumn of 2019, despite the impact on Princetown’s economy.

Plymouth’s local newspaper has suggested the buildings may be turned into many things. Some of the options include a hotel, backpackers accommodation or a venue for almost-real-life simulated war games.

Whatever its future holds, Dartmoor Prison and Museum provides an interesting and entertaining day out for the whole family.