A favourite time of year for so many reasons; one for the beautiful sight of a carpet of bluebells, so how do we know what is a native bluebell and a Spanish bluebell. Below is a report from the wildlife trust -https://www.wildlifetrusts.org/identify-bluebells – on knowing your bluebells.  There is also a link for the best places in Devon to see bluebells.

What is a bluebell?
The recognisable flowers of the bluebell carpet our woodlands in an enchanting sweep of purple every year – a nature spectacle not to be missed. Bluebells spend most of the year underground in a dormant state only emerging to leaf and flower in the spring, growing from bulbs. They mainly spread by seed very rapidly, but their bulbs can split to form clones. the bluebell is protected in the UK under the Wildlife and Countryside Act, 1981, so please don’t pick or uproot the plants, and be careful not to trample over woodland flowers!

The native bluebell
Our native bluebell, Hyacinthoides non-scripta, otherwise named common bluebells, English bluebells, British bluebells, wood bells, fairy flowers and wild hyacinth, is an early flowering plant that naturally occurs in the UK. It appears in ancient woodlands and along woodland edges in April and May. Millions of bulbs can exist in just one wood, giving rise to the violet-blue ‘carpets’ that are such a springtime joy to walk through. This early flowering allows them to make the most of the sunlight that is still able to make it to the forest floor habitat, before the canopy becomes too thick. Native bluebells are protected in the UK under the Wildlife and Countryside Act, 1981.

The Spanish bluebell
The Spanish bluebell, Hyacinthoides hispanica, was introduced into the UK by the Victorians as a garden plant, but escaped into the wild – it was first noted as growing ‘over the garden wall’ in 1909. It is likely that this escape occurred from both the carefree disposal of bulbs and pollination. Today, the Spanish bluebell can be found alongside our native bluebell in woodlands and along woodland edges, as well as on roadsides and in gardens.

What are the main differences between the two?
At a glance, native and Spanish bluebells can easily be dismissed as being the same, but a closer look reveals some easy to spot differences that will let you distinguish between the two easily.

narrow leaves, about 1-1.5cm wide
deep violet-blue (sometimes white), narrow, tubular-bell flowers, with tips that curl back
flowers on one side of the stem
distinctly drooping stems
a sweet scent
cream-coloured pollen inside 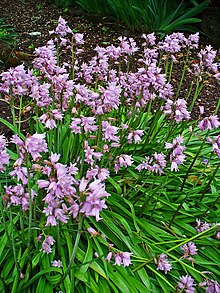 Spanish bluebells have:
broad leaves, about 3cm wide
pale blue (often white or pink), conical-bell flowers, with spreading and open tips
flowers all around the stem
upright stems
no scent
blue- or pale green-coloured pollen inside

Does it matter that we have both in the wild?
The UK’s woodlands are home to almost 50% of the world’s population of the bluebell. But this much-loved plant is under threat. The Spanish bluebell is more vigorous than our native bluebell, so can out compete it for resources like light and space. It can hybridise with our native, too, producing fertile plants that show a whole range of mixed features from both species. Over time, this hybridisation changes the genetic makeup of our native species, diluting its characteristics, weakening it and potentially evolving it into something else.

It is now thought that most bluebells in urban areas are actually hybrids.